A Wild Experience– by Dr Burmeister

Life is simple…eat, sleep, get up, save lives.

Such a simple statement that would make all of life easier if it were 100% true…
But it’s not.

As a veterinarian I have had many an opportunity to help out domestic animals, but have recently become involved with helping out wildlife too.
Domestic animals are, for the most part, looked after by their owners, taken to a veterinarian for clinical updates and shots or incidents that require medical attention quickly.

Wildlife does not get that opportunity unless through human intervention.

In Grimsby, there is a wildlife rehabilitation centre that specializes in raptors – those beautiful hawks and falcons and such that we see all so frequently in our town.

Carol Ricciuto has run the Open Sky Raptor Foundation since 1998 and been involved in rehabilitation for 18 years prior to that – of other wildlife that people brought to her.

It was easier to specialize than diversify due to cost and differences in cages needed for rehabilitation.
All birds can make use of a cage that is 120’ long by 12’ high and wide, but not all birds can be comfortable in a cage 2’X2’X2’.

Unless a rehabilitator has sponsors, they keep their facility running on their own – out of pocket, donations of money or goods needed – the government does not cover ANY expenses, yet demand they are licensed and follow rules and regulations set out by them (which don’t always pertain to the animal in care or make sense). Licensing is a good thing since most people are kind of heart and want to help out an injured animal – domestic or wild – it’s just that most vets don’t deal with wildlife, hence the reason for the need for rehabilitators.

Carol and Livingston Animal Clinic got together when I offered to help with x-rays and such if needed. Carol took us up on our offer and has brought in many birds for x-rays…unfortunately, some, if not most, had serious injuries that they didn’t survive or had to be euthanized.

This is the story of one that made it and I had more than a special part in it!

Carol brought in this beautiful young female Red Tailed Hawk. She knew there was a problem with the leg, but x-rays were needed to see just how bad.

Sure enough, the leg was broken just above the toes of the bird. But, being that the bird was young and the break was clean – no shattering – and relatively lined up, it was what Carol classified as a ‘good break’…one that would heal. 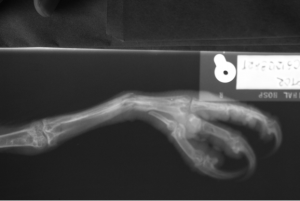 The bird was splinted and bandaged and Carol took her to the Open Sky for rehabilitation.
There the bird was kept, firstly in a cage inverted and filled with shredded paper and a rolled towel going length wise for the good foot to stand on. This allowed the bird to keep the bandaged leg up with the buoyancy of the paper without it actually putting any weight on it and still allowing the good leg to be on the same level as the bandaged one.
The bird had to be hand fed for the first little while due to it not being able to use the splinted leg.
Once the splint was taken off, the bird was put into a cage with perching that was well padded and then the bird was able to do its own physiotherapy without getting too rambunctious.
Once it was evident that the bird was getting its foot more mobile, it was given more than just ‘chunks’ of food…it was given food that it would have to hold in one foot and balance with the other while pulling the food apart to eat.

To find out how you can help make a difference in these beautiful bird’s lives, please visit The Open Sky Foundation’s website