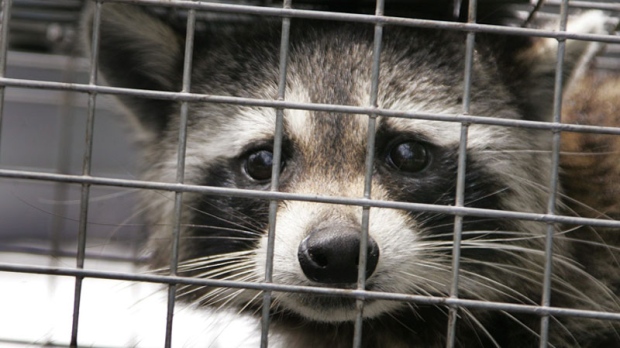 A raccoon in a trap after being taken from a Port Orange, Fl., home, Tuesday, May 1, 2012. (AP / Daytona Beach News-Journal, David Tucker)

While that number is barely half of the 288 rabies cases reported in Ontario in 2016, it is more positive diagnoses of the disease than the province saw in the six-year period from 2010 to 2015.

Raccoons made up the majority of last year’s cases, with the rabies virus being found in 86 of those animals.

In addition to the 86 raccoons, the virus was found in 37 skunks, 20 bats, four cows, one cat and one red fox.

Although rabies cases peaked during the spring and summer months, the rate of new diagnoses remained steady through the end of the year. There were 10 cases reported in December – five in raccoons and five in skunks. Most of those cases occurred in or around the Hamilton area, with one in Brant County.

Most of December’s rabies cases came from Hamilton, which has been ground zero for an outbreak of the virus. Hamilton is also where the outbreak was discovered in late 2015, after a raccoon got into a fight with two dogs in an animal control van. It was eventually determined that the raccoon had contracted the virus in New York state and then somehow made its way across the border.

Nine of December’s 10 cases were tied to this outbreak, with one occurring in Brant County.

The tenth case is part of a separate outbreak of fox-strain rabies, which has been diagnosed in animals between Waterloo Region and Huron County. It involved an animal found in the Blyth area.

There have been 14 cases of fox-strain rabies confirmed as part of that outbreak, while the Hamilton-centred outbreak of raccoon-strain rabies is known to have infected 385 animals.

Prior to the recent outbreak, there had not been more than 50 confirmed cases of rabies in Ontario in one year since 2008.